Grace: A Biography by Thilo Wydra

December was biography month for the Gables Book Group. It's always tough to decide what to choose for these discussions. When Grace was one of Amazon's deals of the day, and I wanted a book for my iPad to take on a trip, I decide on this one.

Grace Kelly has always had a bit of fascination for me. Although I had only watched a few of her films, it seemed that the "rags to riches" story of a princess was what dreams were made of. This biography dispelled so many preconceived notions I had about her.

Her childhood was not a happy one. Her father's nearly abusive treatment of her because she wasn't an athlete and she wanted to follow her heart to become an actress. She had some help from an uncle, but her understated glamour paved the way to her successful career. The book details many of the affairs that she had with her leading men, However, the real hallmark of the treatise is the insight into the movies in which she starred. I did go back and rewatch High Noon and To Catch a Thief.  I realized I had never seen the movie for which she won her Academy Award, The Country Girl. What a powerful performance!

The circumstances surrounding her meeting and marriage to Prince Ranier of Monaco was quite interesting and so orchestrated. The lasting friendship that she forged with Alfred Hitchcock was a lifesaver for her in an otherwise somewhat unhappy life. She became pregnant on her honeymoon and from that time her role was a dutiful wife and nourishing mother.  She did give much of her time, in addition, to charitable causes in the principality.

Her tragic death as a result of a horrific car accident on the cliffs of Monaco sent reverberations around the world.

I remember that I watched the funeral saddened by the loss of an American princess and a loving mother. 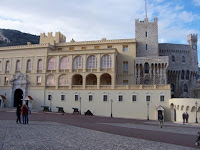 I was very fortunate to have visited the palace and her grave while on a trip to Nice. It was a very simple tomb and certainly not the elaborate or embellished memorial that you would imagine. 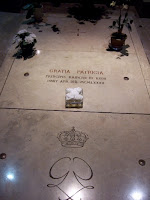 Wydra's book was an easy read, but it could have used some tighter editing. There were numerous sentences that were repeated or events that were rehashed. It almost seemed that the editor didn't read it straight  through to catch those repetitions. All in all,  an informative read, but there are probably better biographies of Grace Kelly.

Posted by Carole Ashbridge at 10:00 PM No comments: